Learn how to build an inclusive economy with a focus on the nonprofit sector.

In this first of our series of conversations with our nonprofit partners, Heba Ramzy, Avanade Citizenship Lead, is in conversation with Gary Cunningham, the President and CEO of Prosperity Now. Learn about the combined journey to contribute to providing opportunities for underprivileged communities to become the next generation of entrepreneurs. 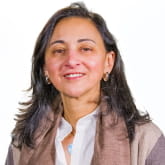 Heba has an accomplished professional history having worked at Microsoft for 14 years and being the founding partner of H&E consult. Heba has received numerous national and international awards including the National Honourary award by Egypt’s First Lady, Cable & Wireless Childnet International Award for excellence, and Microsoft’s highest award, Circle of Excellence in 2007. Heba also created the first international acclaimed Egyptian children gateway, “Little Horus” and co-founded 21st Century Kids Club. Heba has also served on national and international NGO boards and is currently the chairwoman of the MasterPeace board, a member of the Co-Opinion advisory board, and a member of the Eisenhower Fellow President Advisory Council.

Heba holds a master’s degree from London School of Economics in Analysis, Design and Management of Information Systems, and a bachelor’s degree in Business Administration from the American University in Cairo. 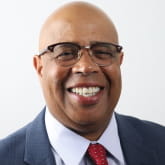 Gary L. Cunningham was appointed President and CEO of Prosperity Now in August 2019. Under his leadership, Prosperity Now is focused on moving from just mitigating the effects of a broken racist system to transforming that system by testing, investing and scaling what works.

Gary is a recognised and respected expert on entrepreneurship, job creation and racial wealth equity and is a sought-after thought leader on issues related to building a more inclusive economy. Prior to joining Prosperity Now, Gary spent years in the trenches working to build economic opportunity for African Americans and other people of colour in the Twin Cities as President and CEO of the Metropolitan Economic Development Association, where he was recognised as an innovator in minority business development. Earlier, Gary held senior leadership positions in philanthropic, community development, health care, housing and transportation organisations.

A descendant of enslaved people, Gary grew up poor in Minneapolis, MN. He went on to earn a Bachelor of Arts degree in Public Policy from Metropolitan State University, located in the Minneapolis-St. Paul metro area, and a Master of Public Administration from Harvard University’s Kennedy School of Government. Gary serves on a number of board of directors including: Association for Enterprise Opportunity (AEO), which works to change the way capital and services flow to underserved entrepreneurs so that they can create jobs and opportunities for all; First Children’s Finance, a national nonprofit dedicated to increasing the financial sustainability of child care businesses; and Artspace, which sources and creates spaces where artists can affordably live and work.

END_OF_DOCUMENT_TOKEN_TO_BE_REPLACED

Enabling human impact: 3 steps for nonprofits to rethink their businesses

Six months into the pandemic and with hindsight, Innes Grant shares examples of how organisations have demonstrated agility to respond to the impacts of the pandemic and are in the perfect place to turn things around.

Employee experience and digital partnering are keys to success.

By knowing and understanding the needs, motivations, and nuances of their donors and volunteers, charities can establish and nurture a long and mutually profitable relationship with their supporters.