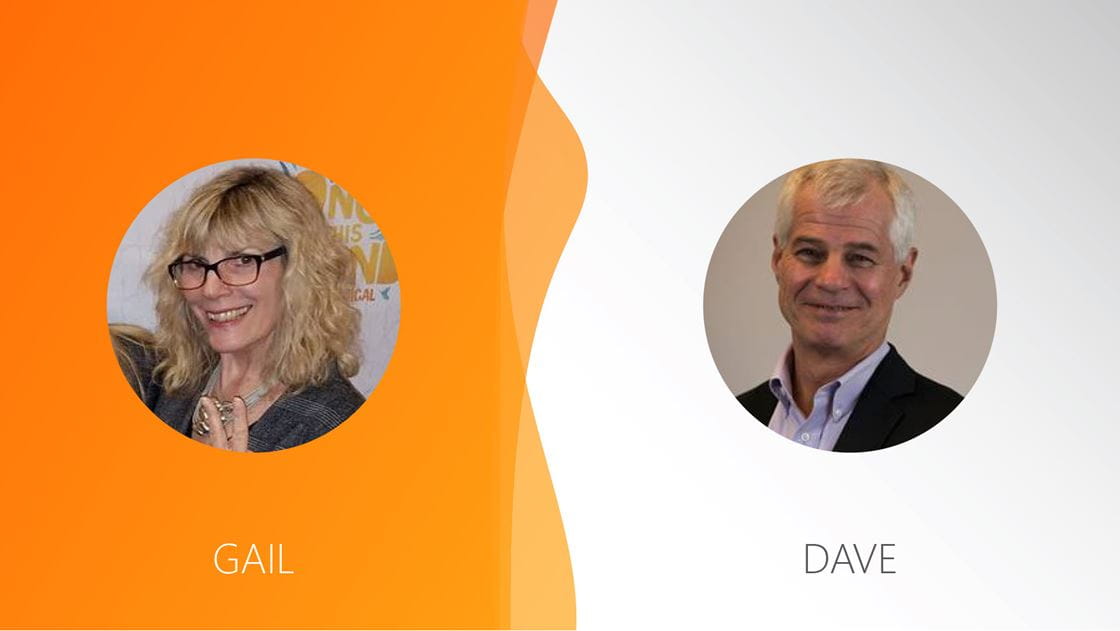 We continue our #Avanade20Years special series on the blog in celebration of our upcoming anniversary on April 4, 2020. Each week on #TBT we share an anniversary special post. This week we caught up with employees #49, Gail Anderson, and #62, Dave Mainer. Gail and Dave are both based out of our Seattle headquarters, and since they joined the company only a month apart in 2000, share many of the same memories of our early days.

1. Do you remember your first day at Avanade? What was it like?

Gail: Yes, I remember it well. It was just a few months after we had opened, in October of 2000. One thing I remember is that people would ask if I was from Microsoft or Accenture; in my case it was neither, so the response was something like: “Oh, so you’re from the marketplace”.

Dave: I came in the month after Gail in a similar scenario – we were probably the only two that didn’t come from Microsoft or Accenture. I had always worked for small(ish) companies before and I remember feeling incredibly excited. The energy was amazing!

Gail: Overall it didn’t take long to fit in; we were all figuring it out and we had a lot of fun!

Gail: My first role was in training and development. We were very big on getting everyone certified in Microsoft Technologies. That plus onboarding new employees took up all of my time.

Dave: I was hired as a software developer to work on the “Engineering Team”.  Our job was to learn what .Net was all about and create some offerings based on the .Net platform which was in alpha release at the time I joined.  The offering we created ended up being called ACA.Net which Avanade was eventually awarded a patent for. Years after I had joined, my hiring manager told me I was hired as Avanade’s first SQL developer. I have no way of knowing if that was true or not.

Gail: There has to be some sort of way to look that up!

Gail: I’m still in Human Resources focused on training and development. Today I’m a manager in leadership development, focused on our developing curriculum for our employee training program as well as additional leadership programs.

Dave: I am on the Information Security team and I am responsible for Avanade’s third party risk programs.  Our focus is to minimize the information security risk of doing business with suppliers by ensuring they meet our security standards.  Statistics vary widely but it isn’t uncommon for companies to be breached via a third party.

Dave: I’ve always been on internal facing teams, primarily in Information Technology on the inside and now in Information Security.  It is truly amazing how much transformation has taken place since I started, both in terms of technology and in maturity. Our IT operations has provided pretty amazing improvements in service stability, and, in the last 3 years, we’ve grown a robust internal information security team as well as a security practice. What has remained the same is the culture. Though we continue to grow, we have a startup mentality and have been able to keep our “small business” feel.

Gail: I would echo Dave’s sentiments. We certainly have matured in all facets. I know that this sounds cliché, but what has stayed the same is the passion that people bring to Avanade and a strong desire to do great work for both internal and external clients.

5. Tell me a funny story about your time at Avanade.

A. Gail: Several years ago, a now former GM went into Pike’s Place Market in Seattle with a film crew and randomly asked people if they knew what the word “Avanade” meant. There were some funny responses but finally someone got it right: Avenue and Promenade.

Dave: It was the retirement event for our first CEO Mitch Hill, who was well loved.  Mitch was a pretty avid cyclist and would often commute on his bicycle. I’m also a cyclist, so the team that was planning a celebration for his last day instructed me to arrange to ride in together from his home. They had secretly invited everyone from the office plus his family and friends to meet in his front yard at 6:30am where we’d have a party and then all go to the office together. When Mitch opened his garage door, he was greeted by a spectacle of hundreds of well-wishers. His front yard had been transformed into a circus, decorated with food stands, coffee carts, banners, balloons, Harley Davidsons…

Dave: The goat! Do you know why a goat?

Gail: I don’t. But it was so funny. And so special. Most of the group rode bikes with him to the office. It was a parade of about a hundred people that took over the streets of Seattle. Dave: We’ll have to dig up a picture.

Thank you to Gail and Dave for participating in this series! To our team - what’s your favorite Avanade moment or memory? Share yours below!