#Avanade20Years: 20 taxis for an anniversary celebration in London

Being part of the Avanade team often means rising to a challenge – it’s what makes our culture so different. But it’s not every day that one simple idea results in the Avanade brand zipping around the streets of London.

In 2019, Avanade’s brand team kicked off a guerrilla marketing approach to engage our employees in promoting the brand and really make a splash in local markets. Marketing leadership challenged local teams to think big and creatively. There were some eye-catching results like an Avanade rental bike station in Piazza di Duomo in Milan and “TheAvanadeExpress – a branded “L” train car in Chicago.

Senior consultant Kelly Heywood searched for an idea that would allow Avanade to show up in an unexpected way.

“I wanted something that would be high impact,” Kelly explained. “It needed to capture the imagination of people better than just your average digital display board advertisement. London’s black cabs are so iconic, and I thought doing something with them would be really new and different.”

Kelly had never spearheaded a guerrilla marketing effort, so she really had start from the beginning and pull in collaborators across the marketing organization, from brand to comms. The finished product – 20 taxis for 20 years or the #AvanadeTaxiService – launched on March 9. For four weeks, 20 taxis branded both inside and out with Avanade’s look and information, will drive around London.

Passengers lucky enough to catch a ride in one of the taxis will receive information about Avanade from their taxi driver who will act as a brand representative. To keep passengers engaged on their journey, space inside the cabs promote marketing campaigns like Workplace Experience, Future Ready. Now, Ready by Design, as well as careers at Avanade with QR codes that drive riders (excuse the pun!) to Avanade’s website for more information.

Of course, another big aim of the campaign is employee engagement in the U.K. – from generating a sense of pride to inspiring people to act as social media ambassadors. On the first day of the campaign, Kelly had one of the taxis available outside the London office for the local team to see and take pictures with.

“We’ve had quite a few people post pictures on social media already,” she said. “There was definitely a lot of excitement. Someone said, ‘This is the most extra way to celebrate our 20 years.’ I thought it was quite funny.”

Avanade has also hired the taxis throughout the month for events and client and executive travel – CEO Pam Maynard has already had her first ride in one.

“We don’t have the opportunity to do this kind of thing very often, but I think that makes it really special on the occasions that we do,” Kelly said. “I hope that as many employees and clients and partners throughout the city get to see it and join in the celebration of our 20th anniversary.” 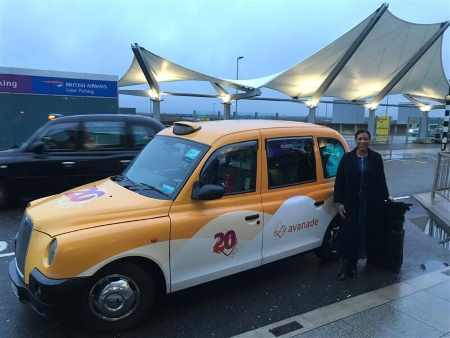