My name is Linh P. Nguyen, but you can call me Avanade Employee Number 1.

I remember my first day at Avanade as if it was yesterday: It was March 20, 2000, eight days after my birthday (I thought of it as a present to myself), 15 days before we officially became a company (i.e. the press release hit the wires), and it was nothing short of chaotic. At the time, we were located at the Columbia Tower, now the Bank of America Building, located in Seattle. I came from Andersen Consulting and had never been part of a start-up before but Mitch Hill, our first CEO who I had worked for while at Andersen, reached out to me and asked me to be a part of a new joint venture between Andersen Consulting (now Accenture) and Microsoft called “Project Shasta,” the code name for Avanade at the time. I’d actually left Andersen “for a minute” before and since I wasn’t on the payroll of either Andersen or Microsoft, it was decided that I would be the first one on the Avanade payroll as a test subject and I received the first paper check issued by Avanade. (The company name was misspelled as “Avande,” but the check did cash.)

With the power of these two great companies behind us, I knew I was in for something very different at Avanade than any place I’d worked before. I was brought on as a Program Manager for the West region to be a customer-facing consultant but was told that since we didn’t have any clients at the time I would be working with the Services and Offerings team, meaning I worked on developing assets for our future clients to use.

As a start-up, we had plenty of moments where we were working out the kinks of our new organization. Now in 2019, we have the MyScheduling tool to keep track of staffing demands, but in the beginning, staffing was very agile and not so technical. Staffing for our first signed client, EMI Music in Los Angeles, basically consisted of me shouting into the office “Who wants to go to LA for this project?!”

Although many things have changed since those early days (and, don’t worry, Avanade is spelled correctly on our paystubs now), many important things remain the same: the collection of amazing, smart people we have and the culture of a small, flat organization where everyone is empowered. What’s kept me here is the fact that we are continually growing and attracting more and more new talents and that I know every day I will do something that will have an impact (large or small) on our clients, our people, our partners and to Avanade.

Anyone I’ve worked with knows that I’m immensely proud of what we’ve built at Avanade over the last 20 years. For anyone who questions my loyalty, I once won a Seattle office costume contest by dressing up as “AvaMan”! I’m also grateful to Avanade for the opportunity to build a career where I continue to learn, grow and make meaningful contributions to our business. I may have changed titles, teams and cities during my time here, but my commitment to Avanade’s success has not changed over the last 20 years. A full circle moment? Seeing my oldest son follow in my footsteps and join our Seattle team this past July after having grown up seeing firsthand the inspiring client work and innovative technology we bring to life every day. 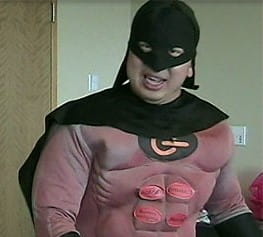 It’s been 20 successful years, and I can’t wait to see what the next 20 (and longer!) bring. My hope is for my son to have an amazing career here as I have, for Avanade to continue to grow while nurturing a culture of family.