I recently had the privilege of working with a mentor through Avanade’s mentoring program. My mentor was also the co-chair of Avanade Australia’s Diversity and Inclusion committee. This relationship opened many doors for me, including the opportunity to lead Australia’s Cultural Awareness and LGBT+ diversity and inclusion team.

I am cisgender and heterosexual, and up until this point had limited knowledge of anything LGBT-related, so I set out to do two things: educate myself and build a team of people who knew more than I did.

A couple of months in, and with all of this newfound knowledge, it seemed like an obvious step to bring everyone else along for the journey. Thus, the concept of LGBT+ Ally Week was born.

The idea soon blossomed into a full-blown campaign, arranged around a five-day series of communications and events aimed to recognise people as individuals and acknowledge that everyone has something to bring to our organisation, regardless of their sexuality and/or gender expression. It also focused on raising awareness about some of the issues LGBT+ people face, in addition to providing information about Avanade’s LGBT+ Ally Program and encouraging people to join it.

A targeted discussion using Yammer (a YamJam) was used to encourage participants to share ideas and talk about the barriers that prevent us from providing better support to our LGBT+ colleagues and how we can overcome them. Australia’s Managing Director, Sarah Adam-Gedge, also posted a LinkedIn article titled “Be Excellent to Each Other”.

Each of our five cities in Australia where we have offices hosted happy hour drinks and all of our major project sites had a morning or afternoon tea. These were complete with decorations and jumbo polystyrene letters which, when combined, spell out “LGBT+”. 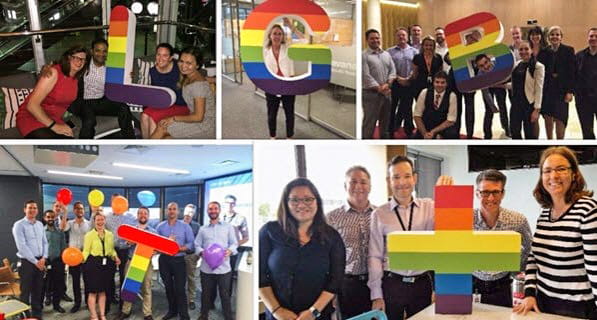 LGBT+ Ally week was an enormous success, which is now being replicated in other cities around the world. It allowed our team to stand up for equality and promote the best of diversity and inclusion by making colleagues and our clients feel respected, both in and outside of our working environment. It was a fantastic opportunity to share information, encourage our colleagues to learn more about LGBT+ and reinforce Avanade’s value that everyone counts.