My career at avanade is tailor-made for me

Hi, my name is Frank and I work at Avanade as the lead for the Messaging and Collaboration Capability Group in Germany. I’d like to share my story that involves Namibia, my sewing machine and Guido Maria Kretschmer, the famous German clothes designer and TV personality.

I grew up in Namibia and South Africa and studied electrical engineering at the University of Cape Town. Everything about technology has always been especially appealing to me but one thing I am particularly enthusiastic about is computers and how they work. After university it was very clear that I wanted to work in the IT industry. I started working at Comparex and then Microsoft. A few years later, in 2001, I came to Avanade Germany. At that time, the company was still quite small and I was among the first 30 people who were recruited in Germany. Today, Avanade has more than 600 people in German-speaking countries and over 27,000 people worldwide. When I look back at this, I'm fascinated by how quickly and successfully the company has grown.

My job was exciting but eventually I was drawn back to Namibia. I wanted to try something completely new and took over the management of a hotel for almost three years. It was a good experience something that I’m glad I didn’t miss out on.

But my enthusiasm for technology brought me back into the digital world. I was very happy that Avanade enabled me to return to the company. Now, I feel like I’ve really arrived since I love my job as an IT consultant. It is still my passion and something that will not change. I enjoy the challenging environment and over the years I have made great friends, both with clients and with colleagues.

What about Guido Maria Kretschmer? I mentioned him above because he is the host of a German TV show, "Geschickt eingefädelt" (The German analogy to the “Great British Sewing Bee”). Starting in November, you can see me on Vox as I compete against seven other candidates for the title of "Germany's most talented amateur sewer" - wish me luck!

I like sewing historical clothes from the Tudor period to 1940 since these garments are extremely complex and require a lot of planning. I've learned that the basic methods for successful project implementation have not changed in the last thousand years, and that helps me in my professional life as an IT consultant as well.

As a complement to needle and thread in my spare time, I am also committed to social projects. As part of a volunteer project, I raised funds and visited a school in Africa with my colleagues from Accenture. In many rural areas over 40 children share one incredibly slow internet connection, if they have access to technology at all. In Europe, technology is part of all aspects of life, from communication through traffic to ordering a pizza. In Africa, the technology is changing only gradually in people's lives as in most places lives are still driven by tradition. I am convinced that through education we have the chance to enrich millions of lives and in the longer term this will help the population in Africa to take their fate into their own hands. 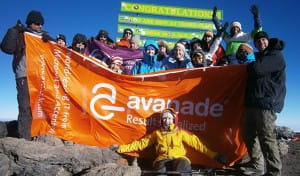 Frank on top of Kilimanjaro with Accenture colleagues