On pugs and roots: Why ‘connectedness’ is so important

"Connections are made slowly, sometimes they grow underground." – Marge Piercy

The idea of “connectedness” has been top of mind for many people during the pandemic. Some have felt less connected, especially during the lockdowns, while others have felt more connected – for example, when spending more time with immediate family.

But connectedness is not just a COVID topic. For Julia Jessen, Avanade’s European general counsel, and Melissa Cacciotti, senior legal counsel at Accenture, it’s been essential to establish and retain a sense of connectedness for many years as part of their professional teaming on major legal matters. And connectedness will continue to be a key issue going forward in the widely dispersed teams they both manage as working from home remains more common. In this conversation, they talk about why connectedness is important, how to cope with disconnectedness and the importance of reconnecting.

Melissa: Nowadays I find it’s no longer a question of whether I’m connected “electronically” but more a question of how connected am I? Internet, email, social media, news, messages, Teams, groups, Zoom. I fluctuate between feeling left out, which relates to no longer being able to physically see and interact with people the way I used to; and feeling invaded by so much “connection.”

But in all this connectedness, where are the human connections? I feel “very close” to my colleagues as I want to know how they’re doing, hear what their day is like and understand how they’re coping. However, I miss the physicality. You know, just someone holding the door for you or carrying your cup of coffee while you juggle your computer and phone. Not to mention the ability to shake someone’s hand and get a sense of their character.

Julia: More often than not, we experience a feeling of connectedness when we meet colleagues around the world, even if it’s virtual. Working for companies with strong values and positive cultures like Avanade and Accenture, it’s normally easy to feel a deep sense of connection with the company and the people who work here. Many times, connectedness arises instantly. Often after I hang up from a call, I think to myself: “Wow, that was nice!”

How do you establish connectedness at work, particularly in times of only virtual connection?

Julia: As lawyers, we work in a field where connectedness and trust are critical components of being able to effectively influence people and teams. Trust is the currency to learn about the interest we represent; trust is the superpower to convince people to do the right thing. We need to establish trust rapidly, even in a virtual setting. And not just with the ones on our side. Be it in contract negotiations, in court or during a compliance investigation, the best lawyers establish connection with all sides.

Melissa: I’ve not cracked the nut of establishing a “good connection” in the virtual world all the time. Sometimes it’s turning on the video at the beginning of the call to wave and then going back to the audio mode so as to “leave space” between us. Sometimes I grab my pug, Carlito, and he’s part of the video wave, but there’s no “trick” that always generates a connection virtually.

However, I’ve had some truly uplifting virtual coffees that have taken me out of my isolation and into a shared space. I’ve had community meetings where people crack jokes and poke fun at each other. I’ve seen shared laughter and irony, which has brought me much closer to colleagues than I ever thought I would be.

Julia: I agree. Humor is great to establish a connection, both in a team setting and – applying an appropriate dosage – even in more formal situations. The same is true for showing that you care about the other person and what they said. Your voice becomes an important tool when we work in a two-dimensional virtual world where body language and natural presence are less prominent. 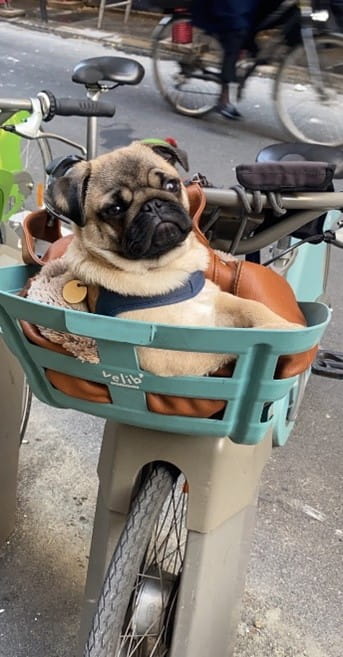 Carlito on one of Paris’ public bikes

How do you deal with disconnectedness at work, and how do you reconnect?

Melissa: Sometimes I just focus on work and I tell myself if someone needs me or is having issues – they’ll let me know. However, that’s not really true, as there’s no coffee machine around which to have a non-work-related discussion. You need to put time in the diary, hope they accept, or ping them and hope they’re free and respond. Then you call and hope the video is an accepted means to establish the connection, so you can try and “see for yourself” how the other person is doing, and see if it’s a good moment to say, “Hey, I don’t feel great.”

Julia: It won’t be the most glorious chapter of your career, but sooner or later you’ll find yourself in a situation where you cause a disconnect. So how do you win back the connection and trust of the other person? Trustworthiness comes from being reliable and consistent in your actions. There’s no easy trick to regaining trust once it’s been lost.

Whatever the reason for the loss of trust, the first step is to acknowledge it and take ownership of your responsibility. If the loss of trust is over a moral issue, a breach of ethics or just doing the wrong thing, then it can be hard to win back trust. In addition to sincerely apologizing and taking ownership, you must show not only that you’ve learned from it but that you’ve fundamentally changed.

And then there’s the flip side: Somebody did or said something and your sense of connectedness came unplugged. For example, I remember when someone’s feedback on something I had worked very hard on felt overly harsh to me. I felt hurt, because besides being harsh, there was also an element of truth in the feedback. Disconnecting was my convenient auto-pilot reaction.

More often than not, you and the other person might both have contributed to the disconnect. They might want to heal the situation as much as you do. At that point, it might be good to pull the person aside and talk about the problem. Maybe the two of you will never really connect and that’s OK. In my case it took some courage, but as a result I won a new, road-tested friend.

How do you remain resilient when connectedness is challenging?

Julia: Many of us speak about resilience these days as the key to get through the COVID-19 tainted times. Resilience requires that you nurture your sense of connectedness, while cherishing disconnectedness as a necessary part of everyday life.

You may have your own place or ritual to reconnect with yourself and life overall. I love walking along a ridge called “Ilkahöhe,” high above Lake Starnberg where I grew up. When I climbed up that ridge recently, taking a path through the woods, just before arriving at the most beautiful plateau with a view of the Alps, I saw fallen trees after the spring storms that hit Bavaria. And I thought to myself, while nobody wants to be that uprooted tree, light storms will make our roots grow deeper. 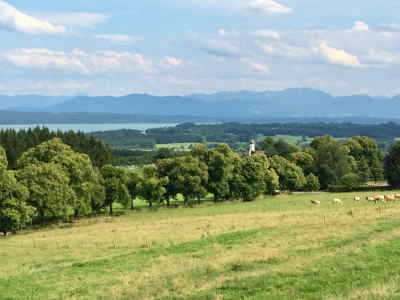 Melissa Cacciotti is senior legal counsel in the Litigation team and works across EMEA South (Gallia; Iberia; Italy, Central Europe and Greece Africa; and the Middle East). She is also the Market Unit Legal Director for Gallia.