#Avanade20Years: A critical go-live, running with the bulls and getting engaged all in one unforgettable week at Avanade

We continue our #Avanade20Years special series on the blog in celebration of our 20th Anniversary on April 4, 2020. This week, we’re featuring Executive Brad Gephart, whose favorite Avanade memory is actually a life-changing year spent abroad on a project.

I joined Avanade back in 2000. I had started my career with Accenture – called Andersen Consulting back then – so I was staying within the Accenture family, but it was still a big change because I was starting down a completely new career path at Avanade. I effectively started over and joined at our most entry level position – so junior we just called it a Level 1 back then! I remember sitting in on meetings with our leadership in absolute awe of how they handled themselves. I’m an executive now, an accomplishment that seemed pretty daunting back in the early days, but I’m still in awe of the caliber of people we have at Avanade, and the deep human impact we have made with so many clients. It’s why I have wanted to remain here all this time, even though spending 20 years at a company seems so rare these days.

So many people have helped me along the way – people who cared as much about my success as their own. I have always tried to do the same. I have had so many colleagues, mentors and friends at Avanade over the years, and some of them I have come to trust so much that I talk to them about important life decisions. As I thought through all my memories from the past 20 years to try to pick a favorite, I can honestly say my jaw began to hurt from smiling so much.

My favorite Avanade memory is more of an incredible sequence of events that took place and shaped my life forever. In February 2001, I left the U.S. for the first time in my life for a yearlong work assignment in London. It was such an incredible opportunity. I was accompanied by dozens of U.S. colleagues to help our fast-growing U.K. practice on what was at the time the largest infrastructure project at Avanade – it would still be pretty big even today! The project work itself was very challenging and rewarding, but the lifelong friends I gained and experiences across Europe are what I will always remember. In fact, during a one-week span in July, we had a critical go-live milestone, I got engaged in Camogli, Italy, and I ran with the bulls in Pamplona, Spain (my new fiancée reluctantly approved of me running 😊). Not a bad week of memories and quite frankly I needed all three events to go well, or I would have been in a jam at work, heartbroken or physically broken!

While most of my close friends from that project have since moved on, the memories and friendships are still very much intact. My fiancée Heather stuck around, and we’ve been happily married now for over 17 years, with two sons and multiple Rhodesian Ridgebacks keeping us entertained. Many of my friends from that project have grown their families as well, getting married and having kids of their own. A few of them I haven’t seen in over 10 years, but these are the types of friendships that pick right back up where they left off and quickly include deep, belly-busting laughs. Needless to say, Avanade has always been about family to me, and my favorite memory is one I am happy to say keeps on giving. 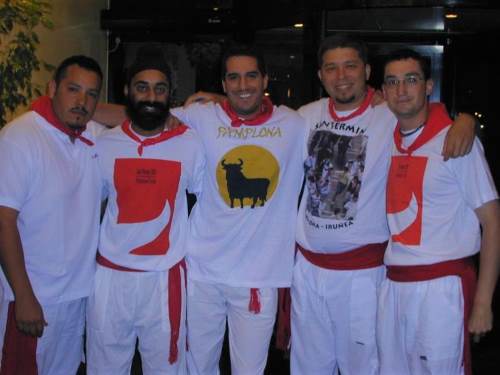 Before my run with the bulls.