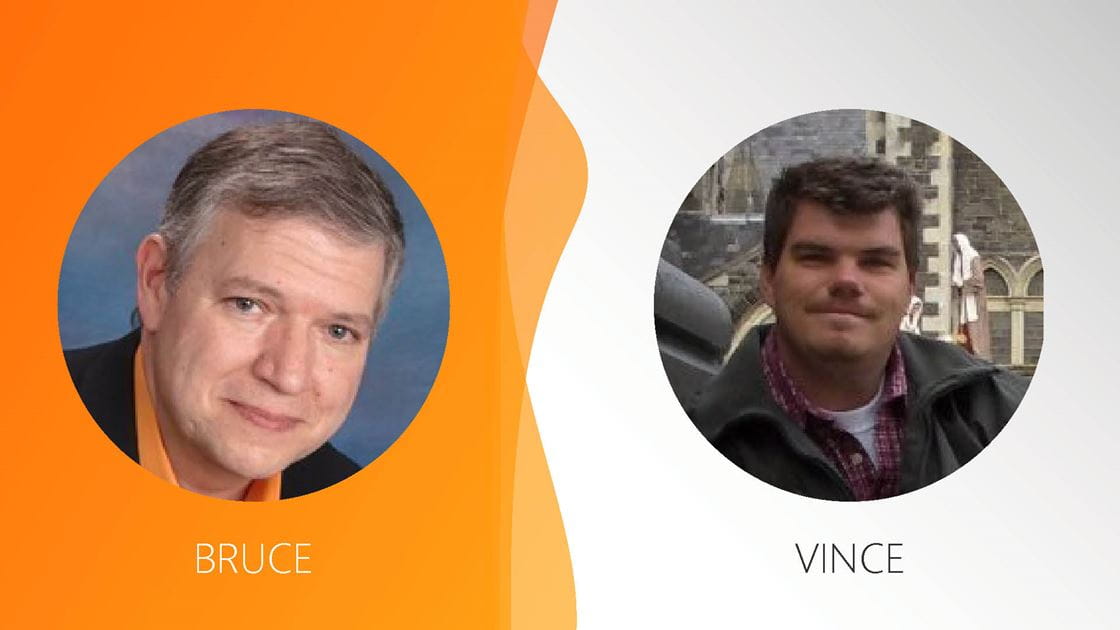 We continue our #Avanade20Years special series on the blog in celebration of our 20th Anniversary on April 4, 2020. This week, we sat down for a conversation with Bruce Woolverton and Vince Pace. They worked together as consultants in Avanade’s earliest days and now both have leadership roles in Human Resources.

Avanade News: How did you find out about Avanade?

Bruce: I’d been working as a consultant at Accenture for a couple years when I received an email asking if I was interested in joining a new startup called Avanade – a joint venture with Microsoft that would be able to go deeper into tech than Accenture currently had the capability to do. I was immediately interested, applied, interviewed and got the job. And then, nothing … It took me some time to hunt down my recruiter and finally get a start-date — nerve-wracking when you’ve already submitted your resignation to your current company!

Vince: I got the same email as Bruce announcing that Accenture (renamed from Andersen Consulting) was joining up with Microsoft to create a new company called Avanade, and I was immediately interested. I joined Avanade July 10 of 2000 and could have joined even earlier, but my client at Andersen wouldn’t let me roll off the project until the summer, and Bruce has never let me forget that he’s been here longer!

Avanade News: So Bruce, you started a little earlier – do you remember your first day?

Bruce: My first day at Avanade was May 8, 2000, up on the 76th floor of the Bank of America Building (now Columbia Tower) in Seattle. The day was spent filling out paper forms, one of which included the question “Have you ever worked at Avanade before?” which I’m not sure could have even been possible at a month-old company! I spent the first year or so flying back and forth every week from my home in Kansas City to Seattle working in the security practice, setting up internal cybersecurity policies. At the time, our security team was five people in a room built for just two. It was pretty tight.

Vince: A lot of flying in that first year. I was brought on as an infrastructure consultant and was flying back and forth to Seattle from my home in Chicago until we opened our Chicago office a couple months later. It was on the 37th floor at 161 N. Clark, where it still is today.

Avanade News: What are some of your favorite memories from those early years?

Bruce: That 37th floor in Chicago – I remember then-CEO Adam Warby and Howard Killman wearing full biker attire, riding a Harley Davidson around the 37th floor. They got it up in the service elevator and it was hilarious. We also used to have these “wired Wednesdays” where they would bring in beer and margaritas and people would play video games on Wednesday nights. For a few of our annual team meetings, we flew everyone to Vegas—

Vince: Yes! In 2005, the entire NA team had an all-hands meeting in Vegas. To prep for that, every region needed to film a video. I was in Bloomington, Ill. at the time and was leaving work to drive up to Chicago to get there at 8 p.m. to start to film the video. Our video was a spoof of our core values at the time – a passion for technologies and things like that – we had a ton of fun with it. Putting that together felt like the startup days because everyone was in it together and we didn’t have time to sleep.

Avanade News: How has the company changed in 20 years?

Vince: This is an organization that embraces reinvention. I’ve been through many roles during my 20 years here. I began as an infrastructure consultant and joined human resources in 2006; I like to tell people I had to join HR because I lost a bet! Basically, working at a growing company often comes with many changes as we mature; I had a lot of questions for our leaders about how these would all work, and one day our HR lead said, “All right, Vince, if you have so many questions, why don’t you join HR and help us figure them out?” I think one of the things that we do is embrace people taking steps. Failure is not fatal and never should be because it’s how we learn. I always knew if HR didn’t work out, I could go back to infrastructure. We all have those stories here – the people who continue to blaze their path forward aren’t scared of reinventing themselves. Let’s never lose that.

Bruce: That’s my wish for the next 20 years. That Avanade continues to reinvent itself. We’re seeing that now with the Accenture Microsoft Business Group. It’s part of the next phase, and I’m excited to see it come to life and for us to fulfill the potential that’s out there. It’s ours for the taking, and that’s the same feeling I had 20 years ago.