On the Move with Adam Warby: behind the scenes

In the weeks leading up to the November 9th filming of “On the Move with Adam Warby” it had been 65 degrees and sunny. And on our shoot day? 40 and rainy. Just our luck. Our plans of filming five episodes of On the Move atop a double decker bus in downtown London needed some major improvisation. Enter umbrellas, space heaters, hand warmers and blankets. Thankfully we booked a bus with a partially covered second floor to keep the rain out and our guests were great sports!

So, what happens behind the scenes and how does filming On the Move work?

An entire season – typically five episodes - is filmed in one long day. We shoot a 45-minute conversation between Adam Warby, Avanade CEO, and a guest on a pre-planned driving route then go back to our starting point so Adam can change outfits and pick up the next guest. Repeat 4x. Sounds easy, but you know what they say about best laid plans… something will always go to awry!

We had so many unplanned, and funny, things happen on this year’s shoot. This included Adam almost getting taken out by a massive tree branch while filming on the back of the bus. I won’t forget that for a long time (causing major injury to our CEO was NOT on my list of things to accomplish!). Another unforgettable moment was when I had to run through the London Zoo to find, meet and pick up Maggie Philbin (yes, she was really at the zoo – where buses weren’t allowed – so I had to find her on foot). But unexpected scenarios are all part of the fun of doing a live video shoot – and it keeps us on our toes. 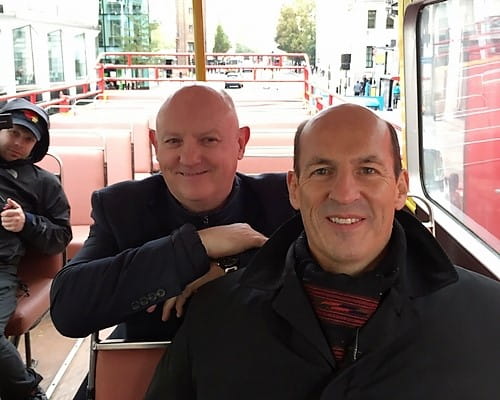 After the filming day is complete, we begin the editing process. Thanks to our awesome guests and great conversations, it is incredibly tough to get 45 minutes of footage down to four minute episodes, but we manage to do it over the course of a few months and lots of reviews.

Now you know {almost} all our production secrets. I hope you enjoyed watching this season as much as we did filming it! If you missed any episodes you can catch them here on Avanade.com. On to Season 3. Where should we head next?