Insurers are struggling to transform their businesses. Whether it’s areas such as cloud adoption, use of AI and automation, legacy spend or Agile and DevOps approaches, insurers appear to be behind the curve. Below are the stats and findings from Avanade’s recent research.

Ripe for disruption
Insurers admitted they have a strong cultural aversion to change (41%; compared to 26% of banks). This was the highest score in all sectors (we covered 21). Likewise, one of the biggest challenges to transformation for insurers is their back end systems (42%; banks 23%) – again, the highest score in all sectors. Unsurprisingly, Accenture reckons insurance is one of the sectors ripe for disruption, based on factors such as a high operating base, weak brand recognition and loyalty and only modest R&D investment compared to their peers.

IT respondents agreed that business executives don’t fully understand how complex IT transformation initiatives can help them realise value (80%; banks 62%) and struggle to develop business cases to justify such activity. Interestingly, banks made similar comments three years ago in a study we undertook around IT modernization. However, the business also thinks that IT could be better at creating business cases and showing outcomes (80%; banks 71%). Unsurprisingly, 65% say that the two sides aren’t working well together to create business cases!

Immature cloud adoption and legacy spending on the rise
Insurers are still immature when it comes to cloud adoption. Almost two-thirds were in the initial or opportunistic phase (rather than systematic, measurable and optimised phases). By comparison, almost two-thirds of banks were in the top three categories. In three years, the picture is relatively unchanged: 6 out of 10 insurers are still in the initial or opportunistic phases. Interestingly, almost 48% of insurers said they had security issues around cloud (banks 36%), which could account for the low adoption rate. 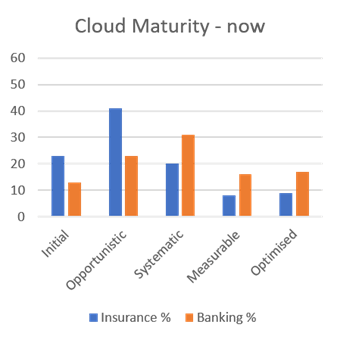 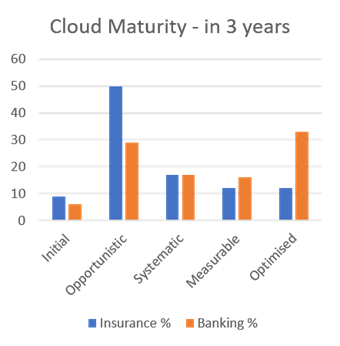 Insurers are planning to spend more on maintaining and supporting legacy systems and apps over the next three years. By way of contrast, banks are moving in the opposite direction. Today, almost two-thirds of insurers are spending up to 20% of their IT budget on legacy. In three years, almost half will be spending 20-40% of their IT budget on legacy. A third of banks said they would be spending only 5-10% on legacy in three years. Almost nine out of ten insurers (88%) thought legacy was hindering their innovation initiatives (banks 60%). 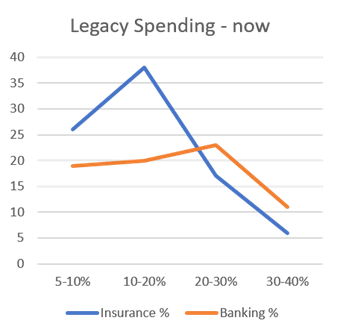 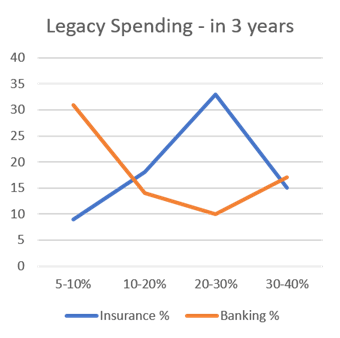 DevOps investment required and scale needed around AI
Insurers strongly agreed that they were keen to use modern software engineering practices much more in their business, such as Agile (47%; banks 33%) and DevOps (47%; banks 29%). In fact, Insurance came out top of all sectors covered. This may be because they have yet to use them in a consistent, scalable manner across the business. The biggest obstacle to adopting such practices was lack of investment. But the business case seems clear: 59% of insurers agreed that 10-25% of time was freed up by using DevOps and Agile (banks 38%); 35% said it was as high as 25-50% (banks 47%).
When it comes to adopting AI to modernize IT, improve employee experience (EX) and optimize customer experience (CX), insurers are firmly in ‘pilot’ mode. Banks, by comparison, are scaling up. Looking at the use of automation in the same three categories, insurers are scaling up to some extent but less so than banks. 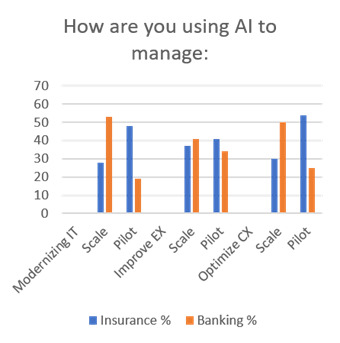 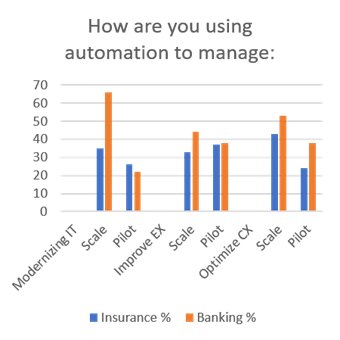 Could do better?
Overall, insurers appear to be behind the curve in many areas. There is too much spending on legacy, which is hindering investment in innovation, including the use of AI and automation in the business. Cloud adoption is low. DevOps and Agile approaches are not being used widely, despite a desire to do so – again, due to lack of investment. Finally, insurers have yet to make the case for business transformation.

Find out more about our approach to business transformation, Ready by Design, a holistic approach to applications that includes cloud-native architecture and modern software engineering techniques. Ready by Design helps banks and insurers adapt quickly to changing market dynamics and ensures they are effectively prepared for disruption - in whatever form it comes.